When you work with a lot of engineers, you start to envy all those cool personal projects they have and all those cryptic plug-ins they know and have mastered. A lot of this happened at Hackathons. So I wanted to try one myself to have a proper experience of trying to code up an app from scratch in less than 42 hours. So when I found about hackZurich, I was sold.

In all seriousness, I was. The hackathon looked amazing: more sponsors than any society or event I've seen. Cool APIs opened only for hackZurich and they even reimbursed most of travel costs. The only annoying this was that this event was happening around exam time. But seeing as I am writing elaborate odes on this, you can probably guess what I chose.

Except it was not that easy: I knew I wanted to go to a hackathon, except I've never been before. And there was an application process. Realistically, I am not sure how selective it was, but there was a cap of 300 people and given that there are always freebies and free food, I think hackathons can be quite appealing.... at least for me. But I mean we had to sleep on the ground, on the tables and on our bags and some people did not even have sleeping bags. I do not want it to sounds like I am complaining. No one actually slept a whole lot (I slept about 4 hours first night and one hour the second) so no one really cared. I found my own non-lit corridor and slept on the floor, because I really need quiet environment. But hey! It was a fun experience and I was worried I am getting a little snobby.

So hacking! We had about 30-40 hours to code an app on any topic, but noting of course that some companies gave us exclusive (and some promoted only their existing) APIs for us to try something new. Except, as a person knowledgeable mostly of the data science stack, I soon realized that I will need to go back to coding some web apps to have something to show. That, however, was a problem, because I have not coded up a web app in over a year. So I was afraid that I simply may not be up to the challenge skill-set wise.

Fortunately, organizers created a Facebook group for people to get together and discuss their preliminary ideas, but standard hackathon rules apply: no code before the official kick-off. So I joined the group and was discussing ideas with people and was quite happy to see that a lot of people were not extremely concerned about the lack of specific skills.

Despite this, I was quite nervous, because this was my first hackathon and I was not quite sure what to expect. I teamed up with a friend of mine, because I figured going to a hackathon in a different country in a busy period and coding in technologies I have never mastered and even the little experience I had was long time ago, it is going to be challenging as is.

We roughly discussed the idea beforehand, but as my head was full of Mathematical Methods exam that I was supposed to be taking the day before leaving, I did not quite do justice to preparation as a lot of Node JS I needed to refresh on the go and that slowed me down considerably. But let's not jump the gun.

After finishing my exam on Thursday and doing chores until my departure from Oxford shortly after noon, I was quite freaked out: I still haven't really unpacked and I was already going places. But the trip was cool: I was flying from London City Airport for the first time, which was quite exiting.

Despite not knowing anything about Zurich, I perfectly navigated and caught the pre-planned (from about a week ago!) train straight to the hackathon venue, which made my day. Hackathon itself was held at a TechnoPark, which seemed to be a quite modern open space for start-ups and small companies. Upon arrival, I got my badge and bag of goodies that I still haven't fully explored, because there's just so much stuff. (Yay!)

Anyway, I unfortunately missed the opening ceremony, but I arrived just in time for the pretty cool workshops: Evernote had an introduction to their APIs and Software Development Kits and then I went to presentation about Google wearables. Where Google-certified android master (presenter) sent a guy who wanted to go to the Apple workshop to the 6th floor (where there was no workshop) and after the poor guy left, he said: "Ooops, I must have been using Apple Maps." The sass is strong with this one.

After the workshops, let the hacking commence. My friend and I were using MEAN stack and D3.JS to build a budget tracking app. That is MongoDB, Express.JS, Angular.JS and Node.JS.

It was challenging doing all this coding, but I have to say, quite fun. The atmosphere was amazing and a ton of caffeinated drinks around. Here and there was an occasional food shortage, but hey: free food. After the kick-off people, obviously, started coding. And they coded... until 430 am. At which point I decided that it might be a good idea to get some rest and so I finally managed to find a nice hallway to sleep in by about 5 am.

You think that was bad? Check out where some of these poor souls have been sleeping: 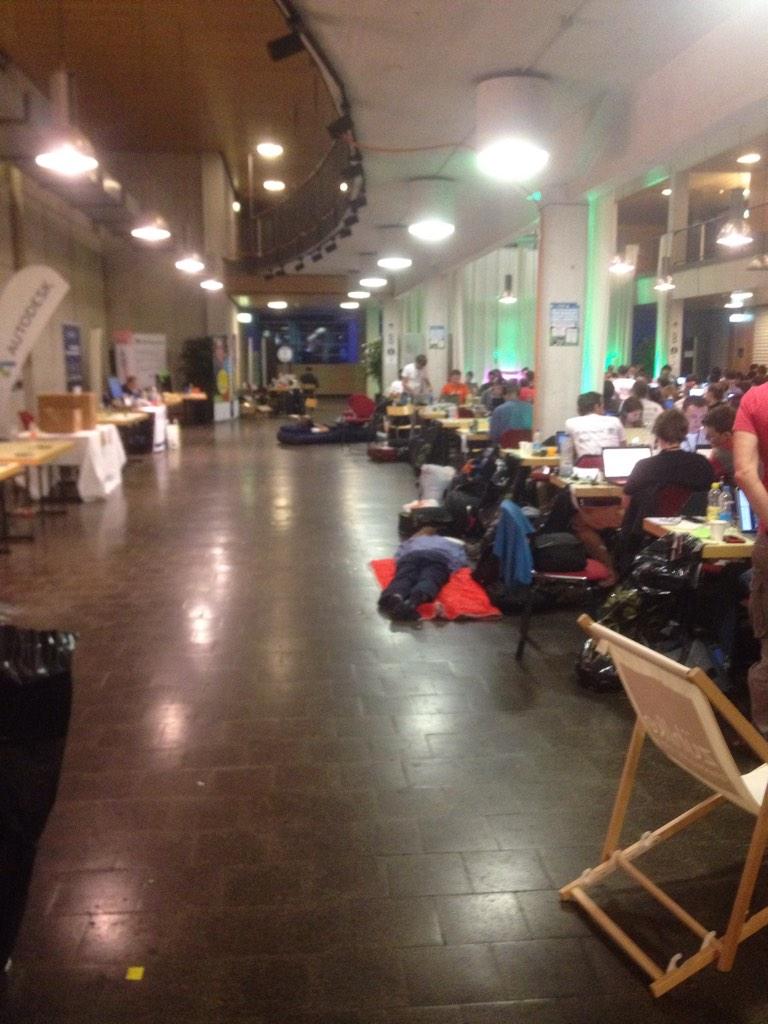 Despite my effort to stow myself away I was woken up several times by people sneaking through my corridor to find an even more obscure corridor to sleep in, which sometimes looked quite weird, not to mention awkward, especially if you make eye contact. Anyways, I woke up by 8:30 am to sounds of some radio (rage) and since I was up and I got breakfast and started working. Morning was quite productive, but after a while we got quite tired and hungry and so we went on a walking tour of Zurich that organizers kindly organized for us.

I have to say Zurich is quite an amazing city. It has a very picturesque, small-town feel and it really feels too fairly-taily to be true.

The next night was a bit more rough as we had issues with our database and Node.JS not being synchronized, which is one of the pains of working with asynchronous stacks, which took us quite a long time to fix. I stopped working at around 4:30 and got up at 6 something to go finish our app before the 930 am deadline.

Unfortunately, our app did not make it into finals--as those were only for 1/4 of the participants--but this hackathon was definitely awesome. Would do again.

Seeing as I yammered for too long again, I will leave it at that, but I will be back for more!